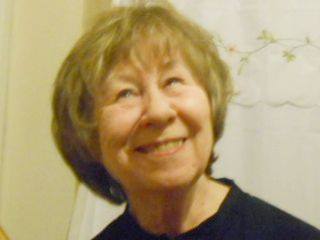 In October 2015, as I was traveling to Oklahoma to visit my sister, I developed a deep gray-teardrop-shaped spot in my right eye which increased after I arrived. I mentioned this to my sister as it was odd I could see around this shape. There was a little soreness and my eye was slightly itchy. My sister said she thought it was Iritis, a condition she experienced from time to time that her doctor prescribed prednisone for. I told her I would see my eye doctor when I returned home.

In November, I saw my ophthalmologist. He examined me and said I had had a stroke in my right eye, plus plaque and a cataract; that there was nothing he could do about it and to return in a few months to have extra vessels zapped off, as they would begin to grow erratically, further damaging the eye. He said I would not get better. I saw my primary doctor and asked him for a second opinion. He made an appointment in Iowa City Hospitals & Clinics in one month. Before my appointment, the teardrop shape disappeared and I had vision as usual in my right eye. About a week later I woke with pressure, pain, and tenderness in and around my left eye, as well as fatigue. It felt like a sinus infection was starting. I had some antibiotic left so I started taking that. About three days into this, I lost vision in my left eye. I saw my eye doctor and he found nothing wrong. I went home to wait for the scheduled upcoming appointment.

In December, I was seen by eye doctors in Iowa City Hospital. They found nothing wrong with my sight but rushed me over to eye surgery doctors for a possible mass on my optic nerve. The eye surgeon did a battery of tests, and diagnosed optic neuritis and suspected giant cell arteritis.  He prescribed 60 mg prednisone daily.

After a month, I stopped taking prednisone, with no taper.  The swelling and pressure were getting better, and I had no pain or itchiness. I still had periodic red flashes that lasted just a split second in the center of my vision though.

A year later, I was driving home from my son’s house two hours away, when I noticed I was having trouble seeing the road signs…they were blurry. No pain, no swelling pressure, no fatigue, just a little bit blurry. About halfway home, I noticed a black spot in the bottom corner of my left eye. Thinking it was mascara, I tried rubbing it out. About ten minutes from home the spot was bigger. It was shaped like a horn & more noticeable, so I headed right to the eye doctor. Sitting in his chair, the black thing was crossways in my vision. I could see everything but that spot. He recommended I go to the ER. I drove home, and posted to Facebook that I needed a ride. A good friend and I were on the way to Iowa City University Hospital in 15 minutes… which is a two-hour drive from home. On the way there, a wave of nausea came twice, quickly, then was gone. At this point, the eye socket felt tender, I had a slight headache, and the vision was getting worse. I checked into the ER and a doctor came almost immediately. I asked him if he could stop me from going blind. He replied, “We are sure going to try.  Don’t be scared,” he said. “See those doctors over there?” I said yes and he said “they are all here for you.” I saw about 10-20 doctors; they were all working on my case. “Wow this must be serious!” I thought. The eye socket tenderness was worse and spreading. Five minutes later, all I could see was from their foreheads up. The doctor again told me not to be scared and I told him I wasn’t. Terror…I was terrified, not scared. I watched as this monster that looked like blackish bubbles filled up my sight and rose higher and higher…then all was black. I was silent. The monster vanished, leaving me wondering what this was, and why did “it” do this and where did “it” go, and was it coming back for the other eye? The terror…sheer terror had me oddly quiet.  That’s the only way I know to describe what terror feels like to me. It just paralyzed me.

One doctor after another looked at me. One called for an MRI and I agreed, silently hoping that with the hurry, nobody would notice the note on my record, that I have a clip in my brain from previous AVM (arteriovenous malformation) surgery, which prohibits MRIs.  But I’m so desperate for answers that I want it done. Someone noticed. Sigh.

I had arrived at the hospital around noon. By 7pm, I was exhausted. They put a bed in the ER for me. I covered my head with my coat to block the painful light and slept. I woke in pain and was given Tylenol which took the edge off. The doctors woke me every once in a while, and reached beneath my coat to poke my eye up down & sideways. It hurts, and I say “ouch” four times to hear “I’m sorry” four times and “that’s OK” four times. That struck me as so funny in some ghoulish way. When I woke at 1am, the doctors looked defeated, and released me on 32 mg of prednisone. I couldn’t even begin to wonder what was next, as a cab pulled up for the 2-hour drive home.

I returned to the hospital the next day. Somewhere during all of this, I had a 3-hour spinal tap. Horrible! I’m blind, and I’m tired of all of the same tests being given over and over.

A few days later, Dr. Joanna Beebe walked into the office where I was waiting. She turned off the light and flashed something on my left side. She told me that the eye was receiving signals “so let’s get started.” She assured me that we will know what’s wrong before the day ends. But I don’t dare hope. At 8am the tests began again. At noon, I got a break for lunch then went right back for more. This woman was fast and thorough. She wanted to remove the clip in my brain after looking through my hair, as she thought it was nothing more than a staple. I was excited to get this done and over with. They did an X-ray first, and then Dr. Beebe walked in at a slower pace, pulled up a chair in front of me, and my excitement drifted out the door…I saw it leaving just like the monster did with my sight. Dr. Beebe told me the clip was in my brain, deep. I buried my head in my hands and a cry escaped. She touched my hand and was silent. Remembering this doctor’s tenacity, though, I quickly wiped my tears away and took a deep breath. I asked, “What’s next?” Blood tests…lots of them. I saw ‘Mayo Clinic’ on some papers and was really puzzled. I told her “it’s OK if you can’t find the answer.” But she gave me a look, and I knew I was in good hands.  She told me to eat and return in an hour.

We are back in the room. Dr. Beebe is sitting down, so this is serious. I’m scared.  My IgG antibody test came back positive for the anti-AQP4 antibody, whatever that is. I blurt out “OK, so let’s get started on an antibiotic, yes?” In her face, I see the answer to that. Dr. Beebe tells me about NMO.  She explains that I have a rare autoimmune disease that makes my own cells attack other cells and strip away myelin, the protective coating, causing pain and blindness.  She will set me up with a neurologist. “Sooo” I think,  “they deal with this…monster.”   Silence…she lets me think over what she said. I tell her how thankful I am for her. Dr. Beebe says “Good thing we started early today, it’s been a long and busy day, but you kept up with me.” I tell her that it was not easy, even though she wore heels. We laugh, shake hands. I have never met a doctor as good as Dr. Beebe.

I check out. Waiting for my ride I think…another rare disease? I survived a brain bleed, beat brain surgery and wear a blue ribbon proudly…I am an AVM Warrior. One is enough in my lifetime. I arrive home. NMO? “Oh, hell no! I’m going to bed and not get up…I don’t want this!!  I’m 70 and not able to go through another major rare disease. Pick someone stronger!”  I fall into sleep, blissful sleep – for three days. Then I grudgingly get up. I feel the way I felt when I started with AVM.  Just numb.

I am told to stay on prednisone and I now take Arava (originally for my arthritis) religiously. Since I didn’t in the past, one of my doctors asks if I want him to call me daily to remind me.  Nope.  I get that this is serious.

When I head back to the eye clinic, the doctor is happy that my eyesight has returned “remarkably well.” He is not happy with the medicine I’m on, though, and demands I take Rituxan ASAP! I tell him I have NMO and before I can go further, he tells me he has three patients with NMO. I’m shocked and my trust in him is gone. He was not honest with me at the beginning.

Next appointment in rheumatology a year later, the rheumatologist wants me off steroids. What?!! She will prescribe a specific taper, but I’m nervous I’ll have a relapse. Then my insurance won’t cover the low-dose pills for the tapering.  Enough is enough!

As I taper off the prednisone, pain comes like little bolts of lightning in my forehead on occasion, like my last attack. Another attack? An “eyeball headache” is what I get most now. Not my head but my eyeball and socket. I find the doctors don’t pay much attention to this.  Sigh. But nothing further happens so this must be residual pain from prior damage done. I learn as much as I can, as it will most likely be what keeps me alive.

I am also about to start Rituxan after all, but I’m scared. From all I learn online in NMO forums, it seems to me that many people on this drug are sick all the time, in the hospital, or some such thing, and they seem to lead miserable lives. I’m doing well and I don’t want to fix something not broken…well…I’m scared to death too.

With assistance from Gabriela Romanow (January 2018)