Dr. Tracey Cho’s NMO Story – Teaching Future Neurologists That NMO is a “Do Not Miss” Diagnosis 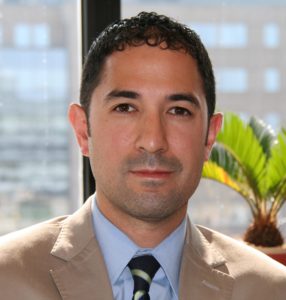 My name is Tracey Cho. I am a neurologist and a teacher. I specialize in autoimmune and infectious neurology, treating diseases like NMO, NMDA receptor encephalitis, HSV encephalitis, chronic meningitis, and neurosarcoidosis. I have also been a clerkship director (teaching medical students neurology) and residency director (mentoring neurologists in training). I have spent most of my career at Massachusetts General Hospital, but am making a transition this summer to the University of Iowa in Iowa City.

As a neurologist and teacher, patient stories are the center of everything I do.

–A man in his 50’s had low back surgery and developed weakness and numbness in both legs a few days later. His doctors were puzzled. Then he developed vision loss in one eye.

–A woman in her 60’s developed blurred vision in one eye, then the other. Within a week she was legally blind.

–A man in his 20’s developed pain in his eye, then completely lost vision in his eye over several days.

–A woman in her 40’s developed some tingling in her arm and leg, then some weakness in her other leg. She got some treatment and started to improve but then developed numbness on the other side.

As someone responsible for teaching and mentoring future neurologists, I focus on learning to recognize patterns and categories of neurological illness with the goal of rapid recognition and treatment. I have spent my career learning about and treating diseases that cause inflammation in the nervous system, from viral infections to immune-system problems leading to self-attack (autoimmune diseases). In many cases, the initial symptoms and testing cannot distinguish between diseases requiring treatments to kill an infection or treatments to turn down the very system responsible for protecting against infection. Time is crucial as the nervous system is an intricate and sensitive network of cells and connections that does not always recover fully from attack. Through the collaborative work of a community of researchers, clinicians, patients, and advocates, we are now equipped to recognize and treat a number of these diseases, making this one of the most exciting areas of neurology. Neuromyelitis optica (NMO) is what I describe to my students as a “Do-Not-Miss” diagnosis, because it is both rapidly progressive and is usually treatable with the right combination of therapies. Each of the patients above represents a success story in the rapid diagnosis and treatment of NMO. Some had more complicated medical courses than others. Some had milder symptoms than others. All of them worked hard at their recovery. While each patient has their own feelings about “success”, I call them successes from my perspective because:

–A father got to become a grandfather and to travel across an ocean to visit his family, walking on his own.

–A matriarch and devoted co-worker who was blind was eventually able to see her family and return to work.

–A young man was able to continue building his relationship with his girlfriend and his career with full vision.

–A mother was able to be there for her school-age children and her husband.

I have learned as much from my patients and students as they have learned from me. I have been lucky to work in a field and in a hospital where teamwork is valued and nurtured. I hope to continue building on that community as I move to the University of Iowa this summer to help establish a program to care for patients with autoimmune and infectious neurological diseases. I am counting on many more NMO patient success stories for years to come!