In early November 2000, Nick came down with viral symptoms. He was just done eating dinner when he vomited across the kitchen – I was shocked. Up to this point he was a healthy 23 month old who was active, talking and above average in his skills and was never sick a day in his life. After vomiting, he started having a fever of 103.5 that would not go away even with antibiotic treatment. He was checked for infections by the pediatrician but they found none – we were told it was just a virus.

The day after Thanksgiving, he was very lethargic, had labored breathing, and a 24 hour bout of persistent hiccups. I was very concerned and called St. Peters Hospital in New Brunswick, New Jersey to speak to the on-call nurses and they recommended bringing him in. We brought him in and they admitted him to monitor his lethargy and dehydration. He was mistakenly given too much IV fluids which resulted in a 30 minute seizure because his sodium level dropped from 132 to 118. After they stopped his seizure, the pediatric enhanced care unit kept him comatose and intubated for three days. After being extubated, he was awake and functional for 3 days until he started deteriorating neurologically. He lost his speech, ability to move, and was barely responsive. He still had a fever and started having a rash that spread all over his body. They had tested him for all kinds of illnesses and viruses and all the results came back negative. They performed an MRI and it showed a lesion in the Medulla – the lower part of his brain stem. They then treated him with IV steroids and three rounds of IVIG. His condition was not improving and only declining more and more each day. 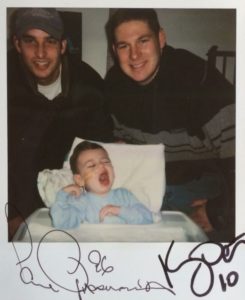 On Nick’s 2nd birthday December 3, 2000 we decided to havehim transferred by ambulance to the intensive care unit of Children’s Hospital of Philadelphia in Pennsylvania (CHOP). The entire neurology team upon arrival saw him and we were told that IF he survived he would remain, as he was – unresponsive. His limbs were contracting, he was not awake and only screamed day and night. CHOP gave him more IV steroids upon arrival but he showed no improvement. A fewdays later, his heart rate lowered to 37 beats per minute then the next day it was near 200 beats per minute. We were expecting him to crash at any moment. They performed another MRI at this time and the inflammation in his brain stem was increasing into the Pons section. CHOP did not know what he had but they were assuming that it was either central pontine myelinolysis (from the rapid sodium fluid shift) or ADEM. There was no definitive test at that time for NMO.

Nick started to slightly improve with time, crying less, becoming a little more awake, starting to have voluntary movements, and his fever had subsided. They transferred him to their rehabilitation hospital where he received intense physical therapy and care.

Nick started to improve slightly until New Year’s Day 2001. He woke up that morning with an increased temperature and his face was all distorted. Half of his face was not moving, he had difficulty swallowing, his eyes were looking in different directions, and the muscles that held portions of his eyes and lids were not working. His cranial nerves were badly affected as was evident by his face. Again he was transferred to the ICU in CHOP and was given more steroids and had another MRI. The lesion had now spread into the Midbrain section of his brain stem and was extending into his thalamus. He remained there for another week and released back to rehab when they saw that he was not getting any worse.

Since we lived two hours from CHOP, we decided to have him transferred to a local rehabilitation hospital in New Jersey on January 21, 2001. He remained there as an impatient for one week then was released to start outpatient therapy daily for nine months. He also started vision therapy including patching because his eyes were affected so badly this time. We were told that what Nick had was a one time occurrence and it would never happen again – we were elated! We saw him recover most of his disabilities and the only residuals were facial weakness and decreased vision in his left eye which was 20 X 400 – his right eye recovered back to normal.

Nick had remained stable with just a few bouts of optic neuritis (several blurry eye episodes all in hindsight now) for many years. This ugly disease resurfaced again when he wanted to play football the summer before entering 5th grade (August 2009). We allowed him to start summer practice but he quickly started not feeling well. Once they started practicing with helmets on in 90 degree weather, Nick started feeling sick, unable to sleep, having headaches and then he couldn’t see out of his good (left) eye. We rushed him to the pediatrician’s office who told us to take him to a doctor who specialized in demyelinating diseases. Nick was admitted to St. Christopher’s Hospital in Philadelphia where he was diagnosed with optic neuritis after an MRI was done and he was given five days of IV Solumedrol. Nick was only able to count fingers in front of his face at that time. He slowly recovered some vision and was released home to recuperate more. Two months later I received a letter from the Mayo Clinic stating Nick was NMO positive and thus our journey was now on a known course. We took him to the MS clinic at CHOP for a second opinion and he went under the care of a neurologist there. At that time we decided not to put Nick on any immunosuppressants unless we absolutely had to. Nick was stable until March 2012. He was battling Strep Throat from January through February when suddenly his symptoms started to change. He complained of a horrible headache over his eyes then woke up the next day slightly forgetful. On March 12, 2012 he went to school but I was called to get him when the teachers noticed Nick was not communicating verbally and he seemed disoriented. I rushed him to CHOP 1.5 hours away and by that time he was having difficulty walking and moving his entire right side. They admitted him and gave him 5 days of IV steroids but he did not improve. Within two days there, Nick could say nothing more than yes or no and was completely paralyzed on his right side. He had an MRI which showed a VERY large lesion on the left side of his brain so they decided to do 7 rounds of plasma exchange (PLEX) to try to help him his recovery. He slowly started improving but we all decided then that Nick HAD to be on preventative meds. He started his 2 initial Rituxan infusions, then three rounds of Cytoxan while the Rituxan was building in his body, then he started CellCept daily as well. At this time Nick also tested positive for Sjogrens – another autoimmune disease (via a positive blood test and parotid gland involvement) so they started him on Plaquenil as well. He improved quickly and was transferred to their rehabilitation hospital again. He stayed there until April 5, 2012 when he was released for outpatient therapy at a location closer to our home in New Jersey.

Nick remained on Rituxan (the drug of choice for NMO), CellCept and oral steroids for almost 2 years. He continued to have smaller relapses (even though his immune system was triple suppressed) involving his vision and limbs all throughout that time. He was receiving infusions every 3 months by this time. The Rituxan was doing it’s job by depleting his B cells (his levels were at 0) but he was still getting sick! Since he was still flaring, his team of doctors decided to confer with the Mayo Clinic to see if there was any other drug he could switch to. They were told about a drug called Tocilizumab which is currently used for juvenile rheumatoid arthritis. It is a monthly IV that must be done at CHOP. They decided to stop the Rituxan and try this instead and as a result, we have been able to wean him off the oral steroids resulting in a 30 pound weight loss and he has been stable and flare free for almost a year and a half! We have also had Nick go gluten free since his Celiac blood panel came back as a low positive and he gets a weekly sub Q iGg infusion to help restore his immune system. I think his team has finally found the “magic” cocktail for his stability!!

It has been a very long battle for us, more so for Nick but we try to remain hopeful and stay one step ahead of his NMO. In the beginning, my husband and I were devastated that our first and only child at the time was fighting for his life. We could barely hold it together while basically living at the hospital with him. Life was basically put on hold for us. After he recovered the first time, we felt like we won the lottery, we were the luckiest people on earth! I never wanted to look back on the worst time in our lives ever again. Unfortunately once he relapsed, we were in denial and could not believe what a hand life was dealing to our family again. In 2012 we realized this would be our new normal. I realized we HAD to get him and KEEP him well no matter what had to be done. There came a time when I realized that I needed to try anything available to preserve his life and functioning despite my agonizing fear of medications and their side effects. That was the hardest thing for me. As his mom, I was always worried about doing the right thing for him and his health yet here I was having to deal with administering harsh drugs to my “baby”.  It’s still a daily struggle but I know I have to do this so he can walk down the halls of high school, get up to go to work and go out and drive his car! You can always sit back and analyze your decisions finding flaws in them but living a fulfilling life is what matters. You can’t dwell on the “what ifs” but instead live your life day to day!

Although Nick does have residual symptoms, like frequent fatigue and extreme heat sensitivity affecting his vision and right-sided movement, he copes very well and is doing great! Nick is truly a miracle and an amazing young man! I can’t thank his team of doctors enough for saving his life many times over and for those who are helping promote awareness and supporting research to help those like Nick who have NMO!